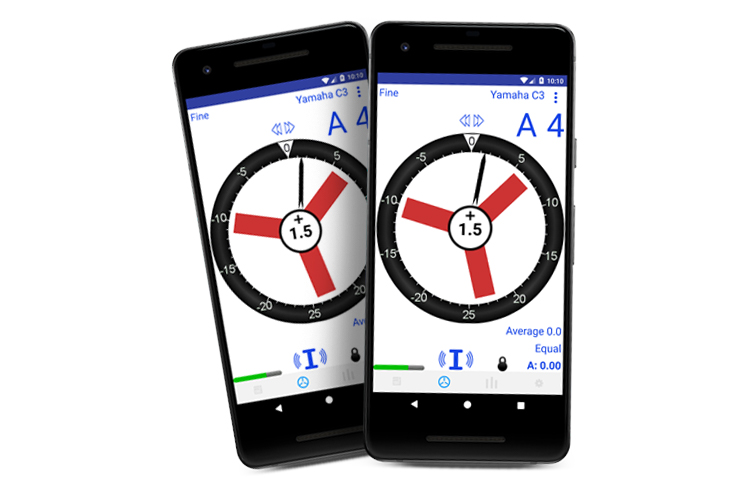 The spinner is a bit bigger in the same size screen because it displays in vertical mode as shown above.

Otherwise works pretty much the same as the ios version with some menu and screen tap differences. I was able to use one as part of the Beta test. If you use on an older unit, make sure to check the calibration to make sure it reads solid on A=440; there was one report I know of that reported a pitch shift reading until the unit was properly calibrated. (good advice for anyone using any electronic device!)

Ron Koval
Thanks!
It works very well! I've also been testing. The main difference between them are the interface differences in the Android and Apple iOS operating systems, although the Android version has a spectrum display that is not in the iOS version. My take is that they perform equally well. I have no preference for one version over the other. A choice between the two could boil down to a matter of which hardware one has or would want to get. Of course for testing I've been using the Android version for all my tunings and I like it just as well as the iOS version.

I personally prefer the Android version in the landscape view, which is more spacious for the layout of the interface elements. The iOS version is by default always in landscape orientation.
Great news, I've always been an android man but had to pick up an ipod a year ago just to run verituner.

David, Is the price of the Android version the same for existing ios users ?
On the Veritune website the price is $799.99. It appears there is no different pricing for an existing iOS user.

Android is new to me, but I'm adapting!
I'm surprised it took them this long to do it, but it's certainly good news!
I wrote "...the Android version has a spectrum display that is not in the iOS version."

I was wrong! Both the new Android version and the Apple iOS version of the Verituner app have the spectrum feature.
© Piano World Piano & Digital Piano Forums